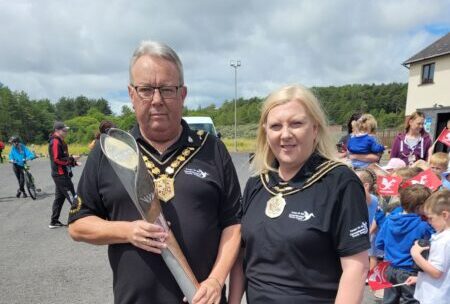 The Queen’s Baton Relay travelled from North Wales on Wednesday 29 June 2022, down to Pembrokeshire and across South Wales over a total of 5 days.

A busy schedule of activities and events have been planned for the Queen’s Baton Relay, with opportunities to highlight untold stories from Batonbearers who are striving for change in their community.

The Baton was taken on the toboggan run by a Para Commonwealth Games team member.

When it reached the top of the ski slope it was handed to a skier to take to the bottom of the slope.

The baton was then taken by bicycle to the beach at Pembrey where a wheelchair competitor relayed it to a waiting RNLI boat.

The boat proceeded to the RNLI station at Burry Port where the baton was handed over to a relay team to run along the Millennium Coast Path to North Dock in Llanelli.

The baton was then presented to the people of Llanelli and Leader of the council Cllr Darren Price and a gathering of sports men and women.

At around 4pm the baton was handed back to the handed the police for the next leg of its journey.

The international route has spanned an impressive 269 days, spending between two and four days in each nation or territory, covering approximately 90,000 miles (140,000 kilometres).

The global journey will conclude at the Birmingham 2022 Opening Ceremony where the final Batonbearer will return the Baton to Her Majesty The Queen.