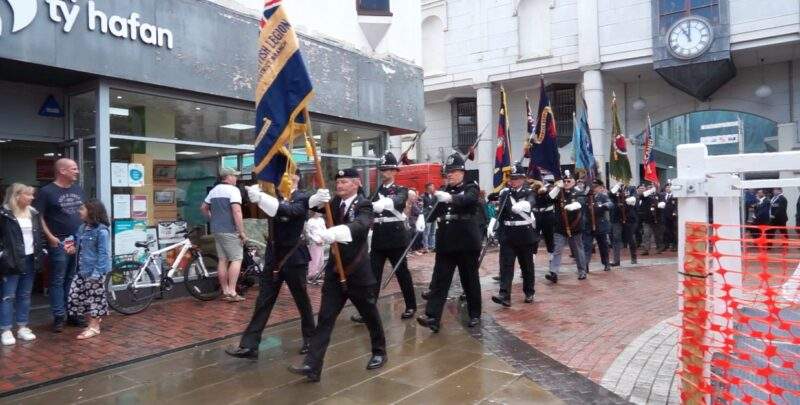 VETERANS from the armed forces, serving members of the armed forces and cadets were present at the 40th Anniversary Commemoration of the Falklands War today, Saturday (June 24) in Llanelli.

Civic dignitaries including Nia Griffith MP, The Vice Lord Lieutenant of Dyfed, David Mathias, Mayor of Llanelli Philip Warlow and Chairman of Carmarthenshire County Council Cllr Rob Evans gathered at the Town Hall Gardens in Llanelli for the unveiling of a commemorative bench.

The service was led by Pierre Cornlouer, Falklands Padre assisted by Rev. Eldon Phillips. At 10am the dedication service commenced before the bench was unveiled at around 10:20 am. Dignitaries then made their way to Llanelly House for refreshments while the parade regathered at Spring Gardens. From there the parade marched along Stepney Street before turning onto Vaughan Street and halting outside Llanelly House where a service to celebrate Armed Forces Day was held.

Armed Forces Day generally focuses on celebrating the living current and ex servicemen and women and this gives everyone a chance to show their support for the men and women who make up the Armed Forces community; from currently serving troops, veterans and cadets and this provides a much valued morale boost for the troops and their families.

For centuries soldiers about to go into battle asked for divine help and guidance in what were known to be difficult times ahead.

Because of distances to be covered and lacking any means of transport to take the soldier to church, the Regimental Padre conducted the service in the field.

This called for a platform upon which he could place his bible and other pieces of equipment he required to conduct the service. Lacking any other altar the drums were put into service by stacking them in layers and draping them with Regimental Colours or National flag which served as a temporary altar.

Padre Pierre Cornlouer performed the service with Rev Eldon Phillips leading the congregation in prayers. Members of the public joined in singing the hymns, Eternal Father and Guide Me Oh Thou Great Redeemer and For Those In Peril On The Sea. Following the Lord’s Prayer both the National Anthems were sung. The parade was then dismissed and dispersed to enjoy refreshments and the start of the 80’s Festival, which was also being held in the town centre.