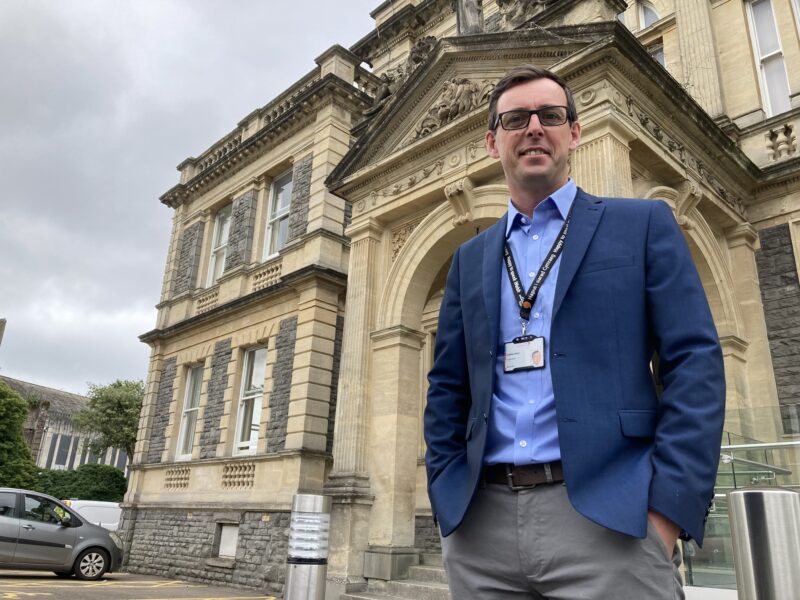 DIRECT trains from west Wales to Cardiff, breathing new life into town centres and helping people hit by rising prices are among the priorities of the new leader of Carmarthenshire Council.

Cllr Darren Price was catapulted into the role after the shock defeat of his Plaid Cymru colleague, Emlyn Dole, in May’s local government elections.

Cllr Price had not served in the cabinet prior to May 5 but put his name forward as a candidate for leader the day after the count, having been asked to by Plaid colleagues.

A couple of months on and the 42-year-old has his feet under two desks – one at Llanelli Town Hall, the other at County Hall, Carmarthen – where he splits his working week, although he still dedicates time to issues in his Gorslas ward.

Although young for a council leader, he served as a Swansea councillor between 2004 and 2012 before deciding to move back to his home county, where he lives with his wife and their two children, aged 10 and eight. He has been a Carmarthenshire councillor since 2012.

“I’ve got a young family and I know the commitment that’s needed, seeing how Emlyn had worked,” he said. “On the day only one name was put forward. I’m very pleased the (Plaid) group put their faith in me.”

Although the party won the slimmest of outright majorities, it continues to run the council in coalition with the Independents.

Cllr Price said the cost of living crisis was the pressing challenge for people and that deputy leader Linda Evans was focusing on this.

Councils don’t have the financial fire-power to make a drastic difference, but Cllr Price said he wanted to ensure all residents knew what support was available in terms of benefits, housing support, grants and the like.

He said the plan was also to work with other public sector bodies to see if there was more more they could do.

Making Llanelli, Ammanford and Carmarthen town centres more viable and attractive is another focus. Masterplans for the three towns were published by the council in January.

“There has got to be a realisation that the retail footprint will be different,” said Cllr Price.

“I’m committed to ensuring that people feel safe in town centres and that they are places people want to visit,” he said.

He would like passenger services to resume along the Amman Valley rail line and direct mainline services between Carmarthen and Cardiff.

“There is a way of doing it so you would maintain current services to Neath and Swansea while having additional services through to west Wales,” he said of the Carmarthen to Cardiff ambition, which would require a new parkway station on the outskirts of Swansea.

Discussions about funding for such rail infrastructure, he said, would be needed with the UK and Welsh Governments.

In Cllr Aled Vaughan Owen, the council now has a dedicated cabinet member for climate change, decarbonisation and sustainability to drive forward its 2030 “net zero” ambition. A new cross-party climate change advisory panel has just been set up.

Cllr Price said he welcomed suggestions from all councillors, including Labour opposition ones. “We have not got the answers to everything,” he said.

The viability of Carmarthenshire’s large number of rural schools has been a major talking point in recent years and a frequent source of terse exchanges in debates.

The council is looking at its school provision as part of a wide-ranging review, which Cllr Price expected to be completed by the autumn.

“I am convinced that rural schools have a place in our education system,” he said. “But that comes with a slightly additional cost. Either we recognise that and are prepared to invest in it, or we don’t.”

The “we” in this case referred more to the Welsh Government, which provides funding for councils to run schools, upgrade them and build new ones.

Cllr Price said the “presumption against closure” approach to rural schools set out by former Education Minister Kirsty Williams hadn’t, in his view, been backed up with the necessary funding to sustain existing ones.

He said providing early years childcare and education in rural schools could make them more viable, offering a continuous route for youngsters up to the age of 11. “A lot of rural schools don’t currently have that service,” he said.

Cllr Price also touched on second homes, which has become a pressing issue for some west Wales communities.

Some councils, including Swansea, have introduced council tax premiums for owners of second homes but not Carmarthenshire. It is something “we want to be looking at”, said Cllr Price.

He said he hoped Carmarthenshire companies would secure subcontracting work for the £199m Pentre Awel wellness and housing project in Llanelli, phase one of which is due to get under way this autumn.

Four years ago the council effectively called time on its separate predecessor, the Llanelli Wellness and Life Science village, when it terminated a collaboration agreement with Swansea University and a company called Sterling Health Securities Holdings Ltd following the suspension of a small number of university employees.

Two of those employees, Professor Marc Clement and Steven Poole, have just lost an employment tribunal against unfair dismissal after it decided they had failed to declare equity stakes in the project.

It emerged during the tribunal that the then chief executive of Carmarthenshire Council, Mark James, had emailed Prof Clement from his personal account in October 2018 about legal advice he had received about setting up a trust.

The tribunal was told that in the email, Mr James said he suspected a “discretionary” trust “would not provide an assurance for the future”, but this might be resolved by a separate document “creating in essence a secret trust in favour of us”. It added: “Or a self declared trust, eg that they hold in favour of us and all we have to do is take up the positions of chair/CEO within a set period.”

Mr James announced his retirement three months later, saying it was time to hand over the reins after 23 years as chief executive.

Asked if he found the email troubling, Cllr Price said: “I have seen the reports in the press – it didn’t look too great. But I’m aware there were police investigations carried out at the time and that no charges have been brought.”

He pointed out he wasn’t a cabinet member back then and hadn’t been privy to detailed information about the project.

“There is not much more I can add,” he said.

Reflecting on the differences of being a Swansea and then Carmarthenshire councillor, he said Carmarthenshire seemed less partisan and more respectful when he was elected in 2012.

He said it was generally accepted the tone had changed in more recent times.

“It is one of the things I would like to focus on,” he said.

Cllr Price said challenge and scrutiny was vital but added: “I think sometimes the tone has descended to a level we don’t want to go on with.”