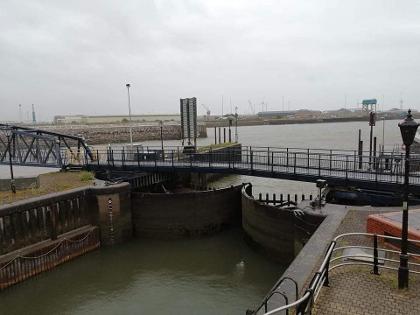 A NEW river pontoon near Swansea’s historic former Hafod-Morfa Copperworks has been given the go-ahead.

Swansea Council wants somewhere that rowing and pleasure boats can stop upstream on the River Tawe, especially as it is redeveloping a number of old copperworks buildings.

The pontoon will feature four linked platforms alongside an existing river walk and disused quay wall on the western bank. It’ll rise and fall with river levels. Safety barriers, ladders and life buoys will also be installed.

The waterside structure will suit Copper Jack – the vessel operated from the marina by Swansea Community Boat Trust – which sails past the copperworks and tells passengers about its history but cannot stop there. The pontoon will also be suitable for Swansea Rowing Club boats.

The council hopes the stop-off point will boost footfall at the redeveloped copperworks, where a new Penderyn whisky distillery and visitor centre is taking shape. Copper products smelted and rolled at the former industrial site used to be transported from a quay where the new pontoon will be to Swansea port.

A heritage impact statement submitted on behalf of the council said: “It is undoubted that bringing back the connection between the river and the copperworks, and using the connection definitively to help tell the story of the copperworks and its place in history, would result in a significant and positive impact on its historical value.”

The pontoon, which is expected to cost up to £300,000, now has planning approval but still needs consent from Welsh Government heritage body Cadw as the old quay site is grade two-listed. Swansea’s planning committee has discussed the authority’s listed building consent application and recommended it for Cadw approval.

An objector raised concerns about a lack of consultation, but planning officers said a site notice was issued.

Meanwhile, another council-led leisure project to build new sporting facilities at Cefn Hengoed Leisure Centre and Community School, Bonymaen, won’t now result in the refurbishment of tennis courts. This element was part of original planning approval for a £7 million sports barn and outdoor five-a-side pitch, but the approval has been amended.