Phill Jupitus has had a long an illustrious career in Film, TV, on stage and on radio. He is also an accomplished artist. He recently appeared at Theatr Ffwrnes with his one-man show ‘Juplicity’. We caught up with Phill after the show and asked him a few questions about his life, his career and his style of comedy.

We began by asking Phill what he thought of Theatr Ffwrnes. He said: “The venue was absolutely beautiful. I was chatting to Johnny who was doing the lights and Andy who was on the sound and sound wise it was amazing. It has great sight lines. The thing is with Wales it is the people who make the show and the audience in Llanelli really seemed to be into it. It is an unconventional show I am on stage and I wander round it is not a normal stand up show. They were a really good audience.”

Juplicity is a take on the word duplicity. A kind of deceit, i.e. not the person we see. We asked Phill, who the  real Phill Jupitus is and if we see most of him laid bare or if he is he exaggerated on stage? Book here for Phill’s show.

Phill replied: “Much as I say at the gig and stress to audiences anyone who appears in public is doing a version of what they are really like. It is more like me as I really am as it has ever been before. I am less bothered with supplying a constructed well thought about version of myself. It would be too much effort. They have seen me for years on television. It seems a bit invidious to think that you can present a tolerable version of yourself. It is like me.”

We asked Phill, which of the many mediums he has worked in had given him the greatest pleasure and which would he have chosen as the sole pursuit if he hadn’t have gone off on so many tangents?

He began by saying that he understood why people would ask that question and said it was one you would definitely want an answer to. He explained: “It is the variety that I like. The fact that I can flip between disciplines is the favourite thing from my standpoint. You have to think on your feet going from acting to stand up to broadcasting to making radio to making television. I like being constantly challenged. If you held a gun to my head and asked which one thing I would like to do for a living it would be visual arts. I’d like to be just indoors painting.”

We asked him if on reflection looking back on his journey so far if he was happy and contented with what he had achieved or if there were nagging regrets or things he would have done differently?

Phill Jupitus was educated at a boarding School and we asked him if he believed that there was a unique brand of comedy, which emanated from that culture and if it had directed or influenced him in his choices of material?

He began by saying that he did not think that there was a unique brand and spoke about his views on boarding schools. He said: “Most people I know who did comedy who went to boarding school the majority of them really liked it and had a good time where as I hated it. I didn’t like it at all. I was reading Stephen Fry’s first book Moab Is My Washpot and I got to the bit where he talks about how brilliant boarding schools are and I stopped reading it. I think it is wrong and there is a degree of negligence in people that let their children go to boarding school. You should grow up with your family not with a bunch of strangers. Lord of the Flies is a book not a lifestyle.

Phill spent a lot of time working in radio and he was at BBC GLR when Llanelli Online worked as a volunteer at the station. We asked Phil if we had seen the best days of radio or if he believed that the best days were lurking in the suburbs ready for a new breed of presenters, comedians and DJ’s.

Phill replied: “The thing is that every generation has its different cultural icons. My perspective as a 55-year-old man looking at radio now obviously the situation we are in now with radio is that it is very much under threat from people making their own radio online. Podcasts are amazing. Some of the best things I have listened to in the last year have been podcasts. There’s S Town,  which is brilliant and Revisionist History is absolutely extraordinary. The landscape is shifting and the BBC seems to be quite on top of providing content for online they have a go. Not everybody has computers so radio is not going anywhere. Radio will always be around in some shape or form.”

Speaking about his time at GLR Phill Said:  “Ian Dury came in to Charlie’s show and I got his autograph.  I went in to pick up the album and Charlie called me in. He introduced me to Ian and I said hello Mr Dury. Charlie Gillett  used to take the piss out of me because I called him Mr Dury.

“I did Radio Ping Pong with Charlie on New Year’s Eve and it lasted for two hours. Sat in a studio with Charlie Gillet playing records was wonderful. I adored that and I have one hour of that two-hour show. I always used to ask for recordings when I was on with him.”

We asked Phill if he could choose someone who has majorly influenced or guided him from his days working at the DHSS to the household name he has become today, who or whom would they be?

Without hesitation he said: “Billy Bragg definitely. He has been a part of my career since I started. He is the reason I was able to quit my day job. There are loads of people who have been around for the long haul but Billy has been there as a good friend and he is still a great colleague and he is making great art. He is an inspiration.”

Phill’s early comedy Star Wars routine could be considered as the precursor for a lot of the new comedians and their monologue – improv routines. We asked him if he thought that this form of comedy has sounded the death knell for what the British public had been fed on for so many years and asked if he saw the work as ground breaking at the time.

He confessed to not having been too self-analytical about his work and said: “My own perspective of my work is very difficult. I have not been very good at putting an external eye on the work I make and do. I just saw a gap in the market. I saw it as something that everyone knew about and chatted about backstage and no one was doing comedy about it. It started off the back of a bet. I was larking about in the dressing room and Kevin Day said ‘do that wookie noise on stage’ and that was the start of it. A week later it was 10 minutes about Star Wars and two weeks later it was 20 minutes about Star Wars and it just grew exponentially. The day I stopped doing that show was the day that the show was longer than the film so I had a two hour twenty minute show about a one hour ten minute film.”

Favourite Welsh comedian? He answered: “Ronnie and Ryan. Boom Films and S4C made a bio of their lives and I would love to get a copy of that and I would like to get a copy of the original Ronnie and Ryan shows in Welsh with subtitles. I used to watch them when I was a kid and they were brilliant. To see another culture, it was the first time I saw another culture represented on telly. I have heard good things about that bio pic, Kevin Allen was telling me all about it.”

Who is the person you’d most like to meet? Phil answered: “Barack Obama. I would love to talk to him about what he thinks is going on at the minute.”

Who is the person you would do your best to avoid? He answered: “All dicks. The world is in such a fractious state at the minute and It is so difficult to avoid dicks. Then I went into showbiz. What kind of an idiot am I?”

Best CD, vinyl or cassette you have? “Sandanista by The Clash.”

Greatest band in the world? “If pushed, They might be Giants.”

Epitaph? “He was always on time.”

The Phill Jupitus Interview was brought to you in association with; 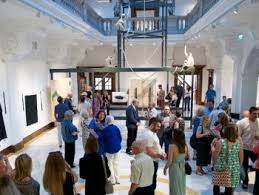 ROWLAND Evans is the son of a farming family who were based in St Clears Carmarthenshire. His journey from the…