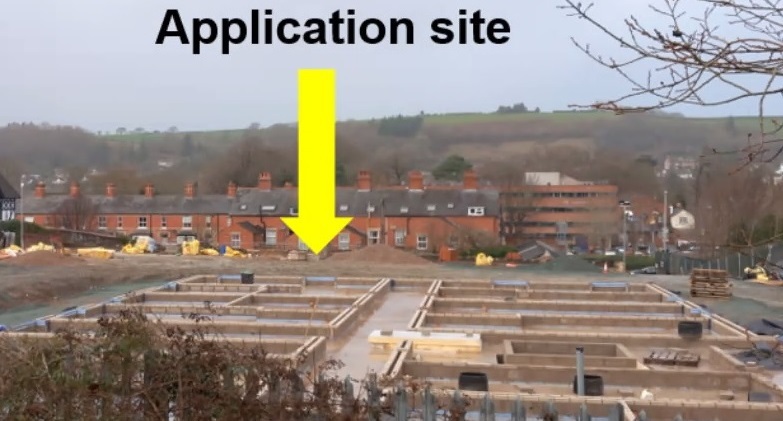 A councillor expressed “surprise” that a planning application for apartments in Newtown was called in for a decision by Powys County Council’s Planning committee.

All other associated applications for the former Travis Perkins site in Newtown had been dealt with by officers under delegated powers.

At the Planning committee meeting on Thursday, January 12 councillors approved the application by Harry Bowen of Mid Wales Property Limited for or eight one bedroom apartments at the site in.

At the meeting senior planning officer, Kate Bowen explained that the scheme is to replace a block of six terrace buildings.

The terrace buildings along with 32 apartments were given planning permission by officer under delegated powers back in February 2022.

Work to build the first apartment block has already started.

Ms Bowen said: “You’re having eight one bedroom units whereas previously it was a terrace block of four, two bedroom units and the ends were two three bedroomed.”

“The application is considered acceptable as a substitution to the previously approved terrace.”

Cllr Pugh said: “I understood that a councillor needed a good reason to call in a planning application.

“It’s been delegated all the way until now.

“What is the good reason the councillor has to call this in front of us, as I’m a bit surprised.”

The local county councillor, Joy Jones had called in the application due to concerns about the number of parking spaces and that it could cause issues to nearby residents

Ms Bowen said: “It’s a new application, the councillor cited parking and highways concerns and can trigger a call in.”

The parking requirement of 40 spaces was agreed in the original application.

Highways authority officer Simon Crew explained that the 40 spaces remained the same despite the alterations to the site proposals.

Cllr Elwyn Vaughan said : “In reality this is a fairly minor internal change more than anything, I can’t see what the problem is.

“I move we approve the recommendation.”

Travis Perkins closed their branch there in 2020 as part of companywide restructure to deal with the Covid-19 pandemic.