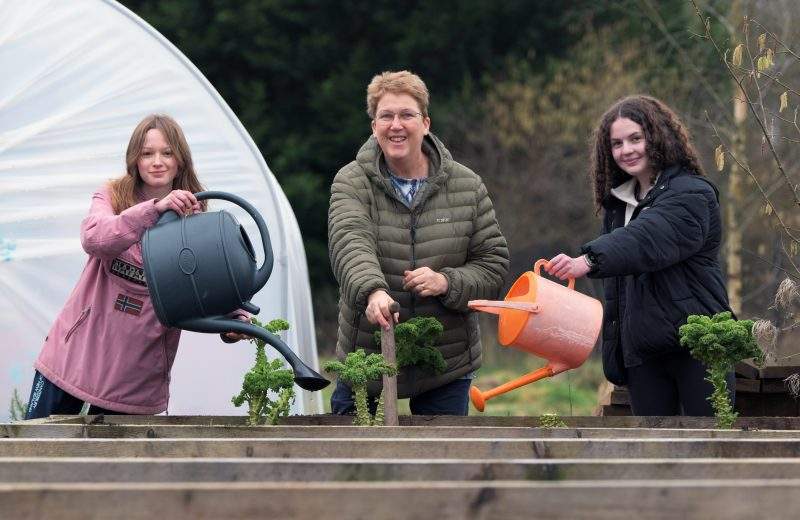 Students at Ysgol Bro Dinefwr showed Cllr Ann Davies around their school building and grounds to highlight their efforts as part of the council’s Prosiect Zero Sir Gâr campaign.

The school is one of many the council is investing in to become more energy efficient with renewable and energy saving technology to minimise its impact on the environment.

Pupils have been wholly involved in their school’s bid to tackle climate change, not only coming up with their own ideas but helping to manage resources such as its outdoor learning area where they plant, tend to and pick fruit and vegetables to be used as part of school meals.

School leaders say giving the pupils practical tasks helps them ‘feel’ the change they are making, putting words into action and encouraging them to think more widely about the climate change agenda.

Cllr Ann Davies said she was impressed by the school’s dedication and enthusiasm.

“As a council we are committed to tackling climate change, indeed we were the first in Wales to declare our intention to become net zero carbon by 2030,” she said. “For us that means we have to get everybody involved, and most certainly our future generations on whom climate change will have the biggest impact.

“It was a pleasure to visit Ysgol Bro Dinefwr and speak with the pupils. We spoke about their concerns for the future, and why they feel they need to take action now to help make a change.

“As well as the practical things they are doing, like harvesting rainwater, growing food, and planting trees and flowers to attract wildlife and offset carbon emissions, they are talking about the issue too – not just in school, but out in their communities and even taking the cause to the Houses of Parliament.”

Assistant headteacher Ian Chriswick said pupils have fully embraced the school’s efforts, even giving up their free time during breaks to get involved in the outside spaces.

“They have been very passionate about this since day one,” he said. “They clearly have anxieties about what is happening to the climate and they feel that they want to be able to do something about it. This gives them a chance to do that.”

Through Prosiect Zero Sir Gâr Carmarthenshire County Council is shining a spotlight on efforts that are being made as the authority works towards being net zero carbon by 2030.

The campaign encourages everyone to play their part in tackling climate change by reducing Carmarthenshire’s carbon footprint, and by having conversations with people about reducing energy use.

Cllr Davies, said everyone should get involved.

“We must all take action now – climate change is already having an impact in Carmarthenshire,” she said. “Every one of us can make a difference. It could be as simple as turning our thermostats down a degree, switching off our lights when they’re not needed, or recycling as much as we possibly can.
“We want Prosiect Zero Sir Gâr to inspire collective action. The smallest of actions will build together to make a big difference.”
Carmarthenshire County Council’s action towards net carbon zero covers every area of its services.

As well as procuring all its electricity from renewable energy sources, the council has made other efforts to reduce carbon emissions including converting street lights to low energy LED and upgrading its fleet to include electric cars and more energy efficient refuse and gritting vehicles.

The authority is also working with other public bodies to deliver wider change, and is exploring opportunities for tree planting and renewable energy generation on council-owned land.

Find out more by visiting www.carmarthenshire.gov.wales/prosiectzerosirgar