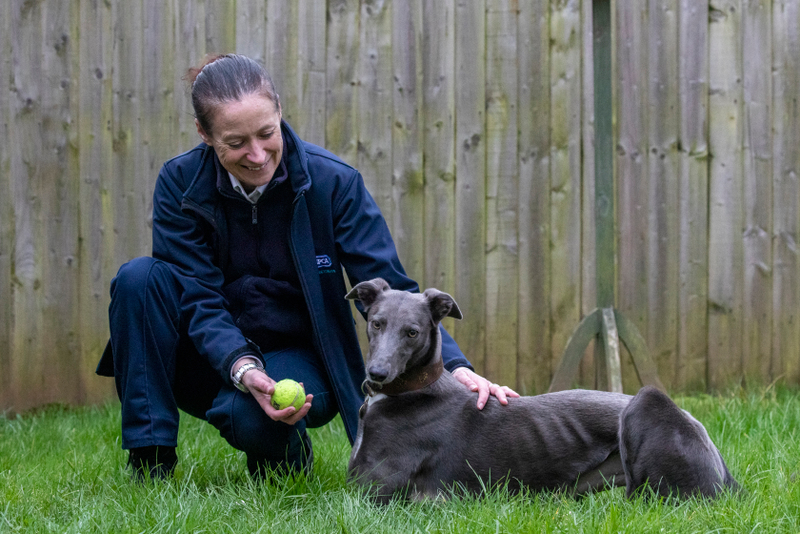 A man who failed to get treatment for his dog who was suffering after an orthopaedic metal plate became exposed in her leg, has been given an 18-week prison sentence, suspended for two years, following a prosecution by the RSPCA.

On 23 December he was sentenced at Cardiff Magistrates Court for neglecting Luna, who has since made a full recovery in the care of the RSPCA and been successfully rehomed.

The prosecution comes after the animal welfare charity had previously appealed for information about the incident.

The court had heard that following enquiries the charity’s inspector, Julie Fadden, visited Glyndwr Road on 4 November 2021 and was told by a man who answered the door that there were no whippets or lurchers with leg injuries at the property. Another man then appeared and said there was a dog in a cage in the back garden with an old leg injury but she was “fine”.

Inspector Fadden asked to see the dog and was shown into the rear garden.

She said: “I saw a grey whippet/lurcher type bitch in a kennel with a run. The dog was grey with white markings and had an exposed metal plate showing, attached to the bone on her right foreleg. The dog was holding her right front foreleg up and I could smell the distinctive smell of infection coming from it, even from a distance.

“The dog was lean and I could see her ribs and spine. The kennel was dark and dirty with some faeces within and there was no comfortable resting area.”

Both men were asked when Luna had been seen by a vet and one of them replied “recently.” He added the accident to her leg had happened two months ago and that she belonged to Michael Mountstephens, who was out. Neither man could confirm which vet Luna had been seen by.

Inspector Fadden told the men that Luna needed urgent veterinary treatment and they both eventually agreed to this after the officer explained that she would otherwise be returning with the police.

A vet who examined Luna later that day said the presence of the orthopaedic plate was extremely obvious and her owner was responsible for “ongoing serious neglect.”

She said: “Luna was mildly lame, being unable to bear some weight on the right foreleg which indicates this was causing pain. It is very likely due to the appearance of the skin surrounding the exposed plate that this wound/exposed bone had been present for a prolonged period, potentially weeks to months, prior to presentation. This would have led to a prolonged period of suffering.”

Police were called to attend the veterinary practice and seized Luna, passing her into the care of the RSPCA.

During the RSPCA investigation it was later alleged that Luna had been dumped at the property and she did not belong to Mountstephens. Repeated attempts to see him at the house and make contact via various mobile phone numbers given to inspector Fadden proved unsuccessful.

On 14 December 2021 the inspector visited Glyndwr Road again and was told by a family member that Mountstephens was Luna’s owner. The man said Mounstephens had taken her to a vet when she had first hurt her leg but the wound had kept opening up. He also confirmed that the family no longer wanted to keep Luna.

Again, a message was relayed to Mounstephens to urgently ring inspector Fadden and a notice was put on the gate of the property asking her owner to contact the RSPCA within 14 days, otherwise steps would be taken to rehome her.

Further attempts by the RSPCA and police to speak to Mounstephens continued throughout December 2021 and January 2022, but he failed to make contact, and the charity made the decision to rehome Luna once she had fully recovered.

Enquiries were also made with veterinary practices in the Cardiff area, but none of their records indicated that they had ever performed surgery on Luna.

On finding Mounstephens guilty of one charge of causing unnecessary suffering at the hearing last July, the judge at Cardiff Magistrates Court said he accepted that he could not be sure that Luna had been his responsibility for the whole two-year period and he was therefore limited to the two months that were accepted by the defendant.

In addition to the suspended prison sentence, Mounstephens was also banned from keeping any animals for 12 months and ordered to pay costs of £500. The bench said they were suspending the custodial sentence because of his caring responsibilities.

Speaking after the case, RSPCA inspector Christine McNeil (pictured above with Luna) who fostered Luna during her rehabilitation before she was adopted by another family, said: “It was lovely to be able to care for Luna and help her recover from what was a really dreadful ordeal.

“We started off with short walks to build up the strength in her leg, and her loving, friendly and sociable nature shone through. She liked nothing more than snoozing on my sofa and trying out all my soft furnishings, and I’m so pleased that she’s doing well in her new home.”