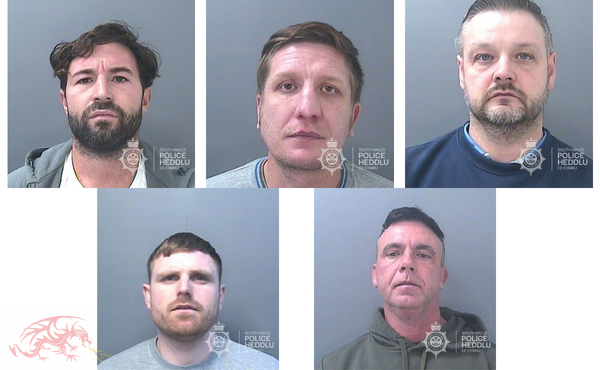 Five men, who were part of an Organised Crime Group (OCG) have been jailed after it was uncovered they were involved in trafficking and importing multiple kilograms of class A and B drugs across the UK.

Operation Wizard was an investigation conducted by South Wales Police’ Force Intelligence & Organised Crime Unit into the drug trafficking activities of Shane White and his OCG.

White, aged 34 from Port Talbot, was the head of the OCG and much of the cocaine he intended to import and supplied ended up on the streets of south Wales.

White was working in partnership with Steven Semmens, age 39 from Port Talbot, but was based in Spain for much of the conspiracy period.

Richard Gerrard, aged 43 from Lancashire facilitated the supply of Cocaine to White in south Wales, as and when White’s own stock was running low.

Another of White’s customers was Andrew Botto, aged 34 from Swansea. Botto was head of his own group with a separate customer base in Swansea. Covert officers from South Wales Police followed Botto on numerous occasions between January and March 2021, when he attended at a lockup container on Penfilia Terrace, Swansea. When officers arrested Botto in May 2021, they searched the lockup he had been attending, and found a Kilogram of Cocaine, along with packaging containing trace amounts of Cocaine, consistent with another Kilogram quantity of Cocaine. Botto was forensically linked to this container and the Cocaine.

White and Semmens used their courier, Ieuan Williams, age 37 from Port Talbot to deliver their kilogram commodities of cocaine to their customers. Williams also had the task of collecting drug debts on behalf of White.

As well as Cocaine, White was involved in the lucrative business of importing and supplying class B Cannabis in the south Wales area. One of his street dealers was Luke Thomas, 23 years, from Bridgend, South Wales.

On Thursday 29th December 2022 at Swansea Crown Court, the following individuals received a total of 52 years and 1 month in custody:

Detective Inspector Russ Jenkins from the Force Intelligence & Organised Crime Unit said “This was a complex and protracted investigation, which resulted in the successful prosecution of a number of organised criminals.

“The web of conspirators were spread far and wide, crossing national borders and continents. As a direct result of this investigation, South Wales Police are still actively engaging with other UK Police Forces and the National Crime Agency, along with our international partners to disrupt the activities of those who seek to flood the streets of South Wales and the wider UK with Cocaine.

“We are committed to tackling the most serious organised criminals who affect our communities. I would urge the public to contact us with any information they have. It may be the key piece of the jigsaw to assist us in prosecuting these serious and organised criminals.”