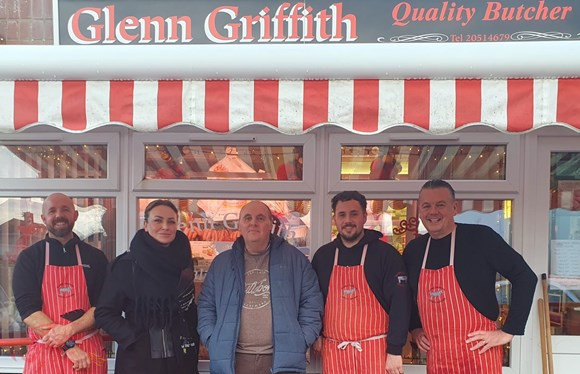 A Ukrainian Christmas made in Wales: The Welsh hosts planning Welsh & Ukrainian festive celebrations after welcoming refugees into their home
Download
“How often do you genuinely get a chance to help somebody and make a difference?”

Those were the words of Nathan Gardner who welcomed a Ukrainian family into his home at the end of November.

The Business Officer from Dinas Powys, along with his wife and two daughters, were matched with Nadiia and her daughter after a successful home visit by Vale of Glamorgan Council. The pair were forced to flee Ukraine following the outbreak of war in February.

Seeing the atrocities of Putin’s actions, Nathan and his family discussed the idea of becoming hosts and voted unanimously to open their door to displaced Ukrainians.

It is a decision Nathan said he was really proud of:

“Why wouldn’t you try to help? Their lives have been turned upside down through no fault of their own.

“It’s a big decision and one you need to talk through seriously with loved ones, but while we might complain about what’s happening in our day-to-day lives, those issues are trivial in comparison to what Ukrainian people have experienced.”

Adamant to ensure Nadiia and her daughter could arrive in time for advent, Nathan began making some changes to the family home – including moving his two daughters into the same bedroom to make space.

“After the last year, I wanted Nadiia’s daughter to have the chance to experience the run-up to Christmas an 11-year-old should.

“At that age, they shouldn’t be able to tell the difference between what a bomb sounds like and what a tank round sounds like. It’s just wrong.

“Seeing her transform into a care-free child again is priceless.”

Nadiia is now working at a restaurant in Cardiff, while her daughter finishes her school day in the Vale of Glamorgan by also doing her Ukrainian schoolwork to ensure she doesn’t fall behind on the curriculum.

Now the whole household are looking forward to the festive season as Nathan’s family will first give their guests the experience of a British Christmas before they then treat the family to a traditional Ukrainian New Year.

They will be joined by other Ukrainian families – who live locally – to stay the night, one of whom fled Ukraine with Nadiia through Estonia.

“We’ll be eating duck, which is traditional for the time of year in Ukraine, at around 11pm, before seeing in 2023 surrounded by friends and family – when we’ll discuss the year just gone and the hopes for the twelve months ahead.

“I know deep down our Ukrainian friends will be hoping that next year they can spend the festive season in their own homes. Until they’re able to, we can keep them safe.”

“I want to thank Nathan and his family, and all those across Wales who have been hosting people from Ukraine.

“Your help and kindness has been an invaluable part of our Nation of Sanctuary approach.

“Many Ukrainian people have told us how thankful they are for the support Wales has offered and I hope stories like Nathan’s will encourage more people to open up their homes to more Ukrainians in their hour of need.”

You can help people coming to Wales from Ukraine by offering them a place to stay in your home or a property you own by visiting gov.wales/offerhome.

The Welsh Government is also funding Housing Justice Cymru to provide training, advice and support to hosts in Wales. You can email them at UkraineHostSupport@housingjustice.org.uk or call 01654 550 550, for advice and support on a range of queries relating to your hosting experience.