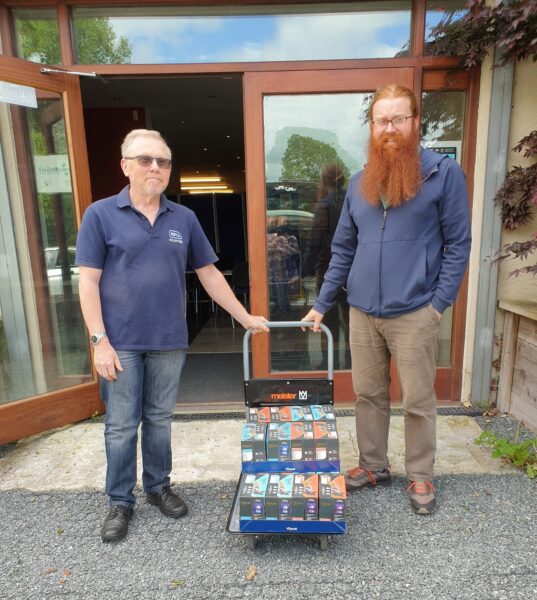 RSPCA branches across Wales have joined together to form a national food bank.

From the hubs, the food is taken to local food banks to help distribute pet food to those in need.

Carl Lloyd, from the RSPCA West Gwynedd branch, said: “Sadly, it seems as though the cost of living increase means that more people are struggling to afford to feed their pets and are relying on the food banks more and more.

“We understand that many people are falling on hard times and we hope that through this food bank scheme we will be able to provide some support to people and their much-loved pets.”

All 11 RSPCA branches in Wales are part of the food bank initiative – with a group of branches in North Wales (Aberconwy, Clwyd & Colwyn, West Gwynedd, Wrexham District & Deeside and Ynys Mon) initially coming together to fund and make this scheme possible.

Carl added: “We ran a pilot version of the scheme developed by RSPCA Aberconwy Branch and supported by the branches in North Wales to make sure we could help those animal owners who were struggling.

“In the North, we used the mobile clinic (which visits eight venues across North Wales each week) to distribute the food to the branches who then distribute it to food banks and other animals in need throughout the different branch areas. From this pilot study we distributed 10 pallets of food which equates to around 50,000 servings in just three months.”

The scheme was then rolled out across the country so all branches in Wales could join the effort to distribute the food where it was needed most.

Carl added: “Since then we have set-up the three distribution hubs and organised another 29 pallets (around 125,000 servings) to be delivered. We’ve probably moved around 25,000 servings since we launched the national scheme in June.

“Each branch contributes equally to the scheme in terms of funding the transport and storage and our hub network may increase as we think about more ways we can help animals and their owners cope during these challenging times.

“If members of the public would like to support this initiative, please get in touch with your local RSPCA branch to see where they need support.” *(please see links below)

So far the scheme has seen donations being made to places including Conwy Food Bank, Bangor Food Bank, Sirhowy Community Centre Food Share and food banks in the Swansea area.

Wyth Sir Branch’s (the newly merged Gwent Brecknock Branch and Glamorgan North & East) manager Darren Oakley – who previously worked as an RSPCA inspector, said he is delighted the branch is part of the scheme. This week the branch is dropping off food to Trussell Trust Foodbank at Newport, Sirhowy, Panteg House and TogetherWorks in Monmouth.

He said: “As an RSPCA inspector I witnessed first hand this cost of living struggle, with some often choosing to feed their beloved pets over themselves.

“We are delighted to be linking with a number of food banks and distribution centres to help those in need – as sadly the cost of living crisis seems to be getting worse, and not any better.”

The RSPCA recently released its Animal Kindness Index, a groundbreaking inaugural report, in partnership with the Scottish SPCA, which looked at the nation’s attitude towards animals.

The report, based on a YouGov survey of more than 4,000 UK adults*, revealed that the rising cost of living and the cost of pet ownership could threaten our love for our pets, with 72% of pet owners saying they think the cost of living will impact their animals, almost 70% expressing concern that the cost of care was increasing, and a fifth worried about how they’ll afford to feed their pets. The study showed cat owners seem to be most impacted and concerned about cost of living pressures.