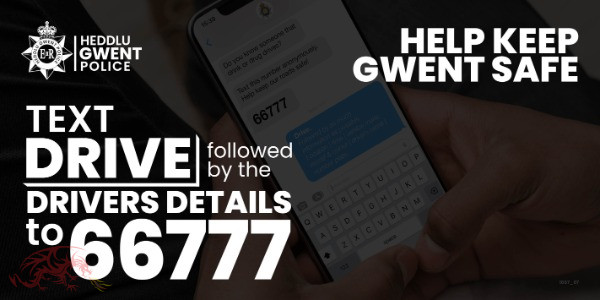 Today (Monday 12 December) we are launching our new ‘DRIVE’ initiative, aiming to identify those drink driving over the festive period.

The ‘DRIVE’ initiative allows you to anonymously report anyone you suspect of driving under the influence of drink or drugs.

It is simple to use – text ‘DRIVE’ followed by as much detail as possible to 66777 and we’ll receive a report which we can act on.

Please include as much of the below information as possible:
– location
– time
– vehicle make and model
– driver’s name
– number plate.

Please note: you must start your message with ‘DRIVE’ for the information to reach us.

“We would like to encourage anybody who suspects that someone is driving under the influence to use this number and report it to us.

“The service is 100% anonymous and can be used by anyone from strangers to concerned friends, and family to prevent other road users being put at risk.

“It’s a quick, easy, and effective way to help keep our roads safe.”

“While most motorists drive within the law, some people selfishly put others at risk by driving under the influence of drink or drugs.

“Our officers have attended far too many fatal road traffic collisions over the last twelve months, directly caused by people drunk or drug driving.

“It’s unacceptable and will not be tolerated.

“We hope that this new, anonymous initiative will encourage people to report those who are risking not only their own lives, but the lives of others by drink or drug driving.”

Driving under the influence is extremely dangerous and can seriously affect your reaction times.

It’s an offence to drive with any of the 17 controlled drugs above a specified level in your blood – this includes illegal and legally prescribed drugs.

The biggest risk that you take when driving under the influence is causing a collision because alcohol and drugs can affect your driving in a number of ways. Such as:
– reaction and coordination skills
– impaired vision
– drowsiness
– aggressiveness
– over confidence
– erratic behaviour.

We ask that anybody who has concerns about somebody that they believe is driving under the influence top contact us by texting ‘DRIVE’ followed by as much information as possible to 66777.

Don’t get behind the wheel if you’ve been drinking or taking drugs – it’s never worth the risk.