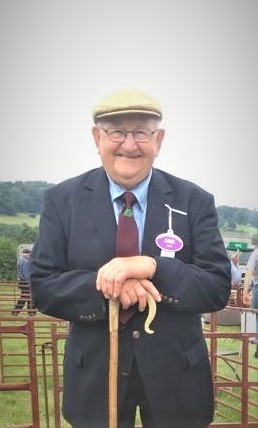 One of the most prestigious prizes in Welsh agriculture, the John Gittins Memorial Award for outstanding contributions to the Welsh sheep industry, has been won this year by Mr Lionel Organ, from Llandysul, Carmarthenshire.

Mr Organ has farmed at Tymaen Farm for the past 25 years, situated just north of Carmarthen. He ran a large Charollais flock of 450 ewes for 30 years, and now continues with his Lleyn flock of 200 ewes from 1985. His initial plan was to promote the two breeds of sheep in Wales by showing at the Royal Welsh Show and many smaller one-day shows. With the Charollais breed being signet recorded, he planned to hold regular production sales for the Charollais on-farm in a purpose-built sheep
shed. He has always strived to produce a Charollais breed sheep suited for the commercial as well as the pedigree breeder, and a breed that is more than capable of thriving in the Welsh climate.

In 2000, Mr Organ held his first on-farm female productive sale, aimed at the pedigree breeder, and continued with biannual sales up until the dispersal sales in 2009 and 2010, with buyers from all corners of the British Isles. Mr Organ has always stressed how important showing as a shop window for breeders has helped with displaying his best produce, especially at the Royal Welsh Show. Mr Organ has won many competitions, including several Champions at the Royal Welsh Show and his breeding has gone on to win at the Royal Highland Show and at the Great Yorkshire Show.

Since the dispersal of the Charollais flock, he has focused on his breeding skills on perfecting a modern-type Lleyn, selecting for tights skins, length and improved conformation, able to rear two lambs with their combined weight equal to/or heavier than their mother at 12 weeks of age entirely off grass (75/80kg). Mr Organ continues to promote the breeds by sharing his wealth of advice and experience with college students and new breeders.

Mr Alwyn Rees, representing the Royal Welsh Agricultural Society, Mr Richard Thomas, from the Welsh Mule Sheepbreeders Association and Ms Kate Hovers, from the National Sheep Association Wales made up the panel of judges for the Award.

The judges stated that the quality of candidates this year was, once again, outstanding. After interviewing a shortlist of three impressive candidates, the judges agreed that the John Gittins Memorial Award should be awarded to Mr Lionel Organ in recognition of his lifetime contribution to the Welsh Sheep Industry.

Mr Organ will be presented with the award at the opening ceremony of the Royal Welsh Winter Fair on Monday 28th November.

For more information about the Winter Fair, or to purchase tickets please visit the RWAS website.