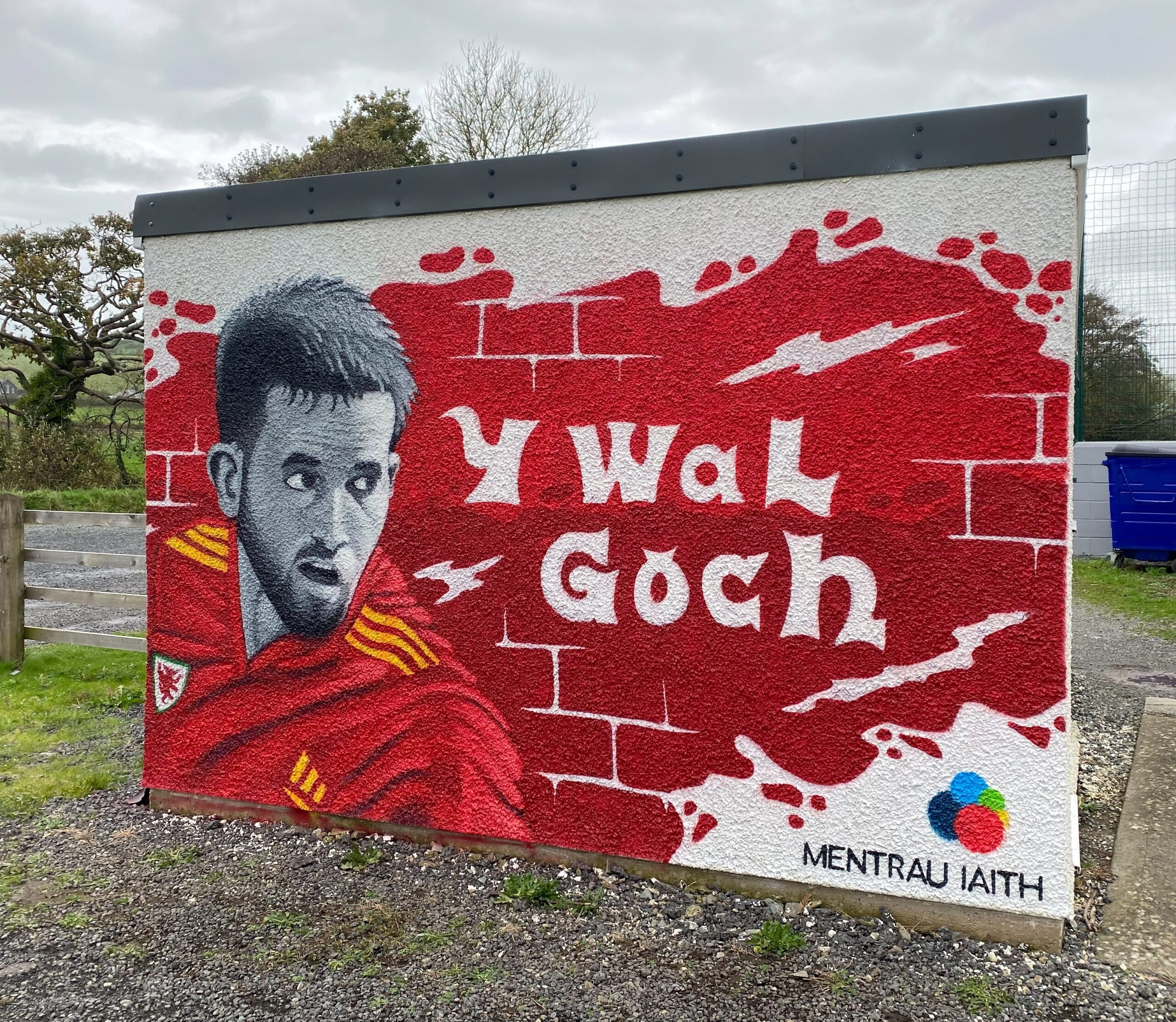 A brand new mural of one of the stars of the Cymru football team has appeared in the village of Bow Street as part of a project by Cered and Mentrau Iaith to celebrate Cymru reaching the FIFA World Cup for the first time since 1958.

Recently, murals have appeared across the country of some of Cymru’s players in those locations where they were raised e.g. Joe Allen in Narberth, Gareth Bale in Cardiff, Joe Rodon in Swansea and Harry Wilson in Corwen. Now it is possible to announce that defender Rhys Norrington-Davies is the subject of the latest mural in the series and it is situated at Bow Street Football Club where Rhys played when he was young.

Wyn Lewis, CPD Bow Street Chairman said: “The club is so proud of Rhys’ success over the last few years. Rhys started his footballing career with us here on Cae Piod and it gives us great pleasure as a club to have a mural of him next to the pitch. Of course, his recent injury means that Rhys will not be playing at the World Cup but having spoken to his family and with Rhys himself we were all keen to proceed with the mural remembering that he played an important role in our campaign to reach Qatar.”

Steff Rees, Team Leader at Cered: Menter Iaith Ceredigion added: “It was great to be able to work with CPD Bow Street, Mentrau Iaith, the graffiti artists Tegeirin and Lloyd the Graffiti on this project to celebrate the Cardi who helped secure Cymru’s place at the biggest sports tournament on the planet. Hopefully, this mural will help inspire the young players in the youth teams that they too can go on to play professionally and represent Cymru.”

The Mentrau Iaith network is one of the key partners of the Welsh Government’s World Cup Partnership and is holding a range of exciting activities to celebrate the Cymru football team and their success in reaching the Football World Cup in Qatar this year.

Locally, Cered will be working with Theatr Felinfach to host a number of Welsh Language activities that bring sport and culture together. Over the next few weeks there will be photography workshops, evenings of song and poetry as well as live broadcasts of Cered’s radio show ‘Cefn y Rhwyd’ happening across Ceredigion. For more information about these activities follow Cered on Facebook, Twitter and Instagram or email cered@ceredigion.gov.uk.

On Monday, 21 November on the day of Wales’ first World Cup match, Cardi Iaith will launch a song which will be available only in music track form and there will be a film to support Wales in the competition. Ceredigion primary schools took part in a workshop to create the poem with Poet Ceri Wyn Jones which was then turned into a song.

All the county’s high schools have also been involved in creating a poem with Aneirin Karadog which has now been turned into a poster by artist Lizzie Spikes.

The Council has also prepared an educational resource pack that develops a range of skills through the context of the World Cup, which has been shared with all teachers in the county.

There is great excitement in the county’s schools – they are ready to support Wales! All the work certainly makes the Welsh language exciting and relevant to our children. If all the effort put in be turned into goals, Wales would surely beat the World Cup! To keep up with Cardi Iaith’s activities, follow them on Facebook at @CardiIaith.