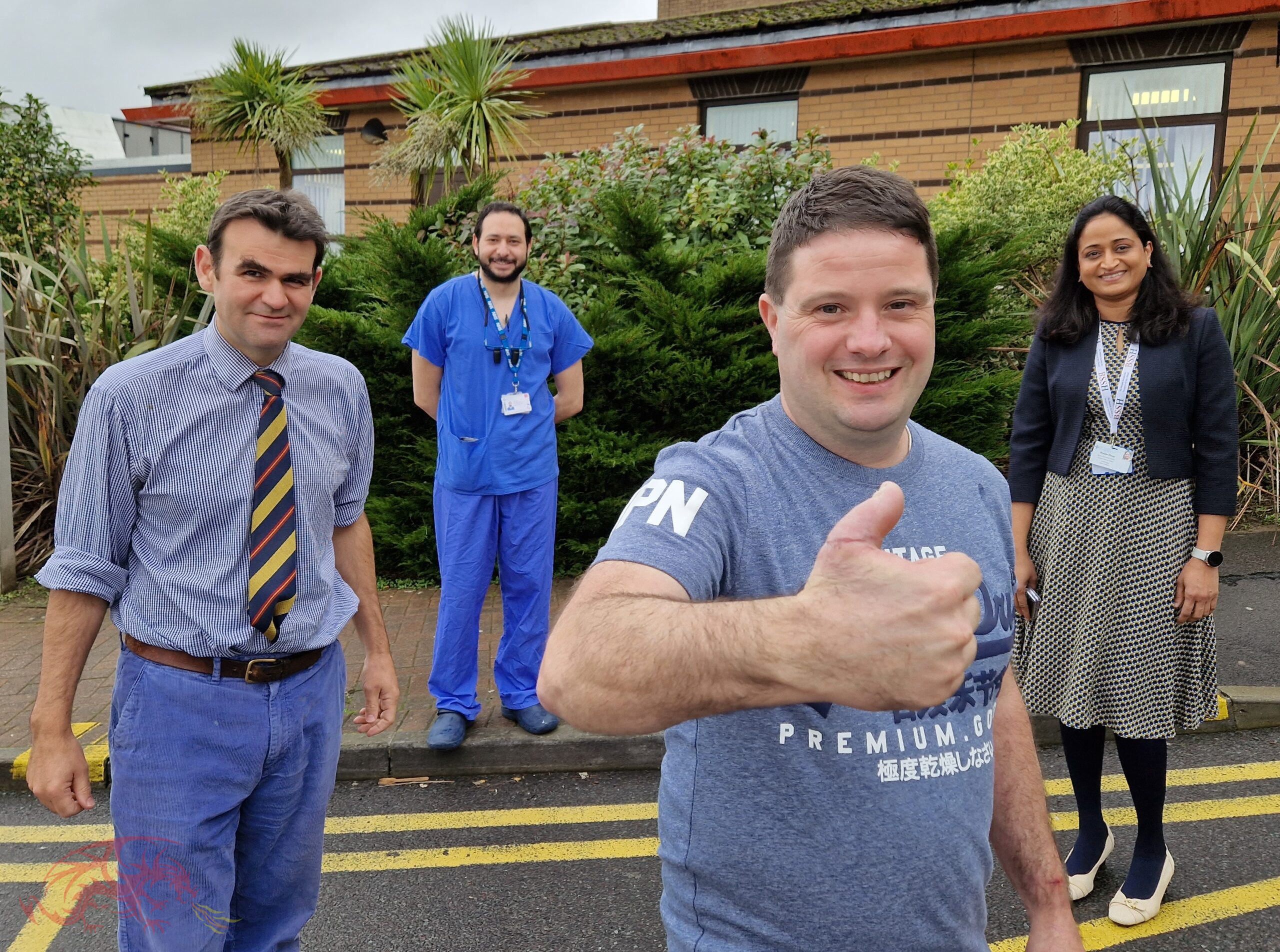 A joiner has given a relieved thumbs up to the Swansea Bay surgeon whose skill has enabled him to do just that after he cut it off in a workplace accident.

Arwel Davies spent 10 minutes looking for the severed digit before taking it to the hospital with him – even though that meant walking through the doors carrying a circular saw.

The 42-year-old, from Llansadwrn in Carmarthenshire, (pictured above with consultant surgeon Thomas Bragg, left, and team members Kareem El-Shishtawy and Sheela Vinay) said: “I had the saw with me because my thumb was jammed inside its safety guard.

“I had some funny looks when I walked in – they probably thought I was going to kick off but as soon as I told the receptionist my thumb was inside, it was fine.

“They took the thumb out, put it in a bag and sent me for surgery.”

The accident happened while Mr Davies was working outside a customer’s house in Llandeilo.

He said: “It happened on 1st September at 2pm. That’s when my thumb came off. I will never forget that date.

“I was using the saw to cut some wood clamped to a bench, something I’ve done countless times before, when it came off the clamps. I went to grab the wood with my right hand, while the left kept the saw going without really thinking. In less than a second my thumb was off.

“It was painful but not as painful as I thought it would be. That was probably down to the adrenaline running through me. I was sweating loads.

“Surprisingly, there wasn’t much blood. I was told it was because it was such a clean cut. I thought it would have been spurting everywhere.

“I didn’t panic as you’re no use or ornament to anyone. I went into auto pilot – look for my thumb and get to hospital as quick as I can.

“I spent 10 minutes looking for it on site thinking it had been kicked out.

“If you look at a saw, the dust is blown backwards. It then dawned on me that it may be inside the saw. I had a look and it was there. I couldn’t get it out; so I had to take it with me.”

Although Mr Davies initially went to Glangwili Hospital in Carmarthen he was transferred to The Welsh Centre for Burns and Plastic Surgery in Morriston Hospital. There he came under the expert care of consultant plastic surgeon Thomas Bragg and his team.

Mr Davies said: “They knew I was coming so within the hour I was prepped for theatre and in. I can’t remember much after that because of the anaesthetic.

“They fused the bone together with titanium wire. How they did it I don’t know.

“When I came around in a hospital bed my thumb was in a cast and all I could see was the tip. I was in a bit of a daze and it was near midnight.

“The next morning, after I woke up, they started putting leeches on my thumb to make it bleed.

“They are very clever. They said the artery was pumping in too much blood for the veins to handle so they put a leech on to help bleed it.”

After the thumb was reattached, both patient and surgical team faced a nervous wait.

Mr Davies said: “They said the chances of it taking weren’t good, because of the state of the thumb in the saw.

“But they have done a fantastic job. I’ve starting to get feeling back and it’s actually looking like a thumb again now.”

He has shared his story in order to thank all who cared for him.

“Mr Bragg and his team are absolute stars,” he said. “I can’t thank them enough. They were so very professional.

“I was expecting to wake up without a thumb to be honest with you. But they worked a miracle.

“They said it would take six to 12 months before it fully heals but I’m self-employed and do need to go back to work.

“In the meantime I’m left twiddling my thumbs – something I can do again now!”

Mr Bragg said he and his team faced a race against time.

“The clock is ticking on injuries like this and you only have four to six hours after the injury to re-establish the blood supply before you lose the thumb. The saw makes quite a mess of the soft tissues crushing and ripping the tissues. This makes a difficult situation worse.

“On meeting Mr Davies we were circumspect about our chances of success but were very keen to do what we could.

“After six hours of microsurgery we were delighted to produce a stable thumb with good blood flow. The vessels are just over 1mm in size, requiring a steady hand after night fall. The suture material is just a little bit smaller than a human hair.”

Mr Bragg declared the operation a success and predicted Mr Davies would be able to return to work in the future.

He said: “Injuries like this are some of the most devastating due to the role of the thumb in facilitating hand function. In a young joiner whose livelihood depends on his hands, the stakes are even higher.

“We are all delighted with the results, a nice pink thumb that is gaining an increased range of movement with our dedicated team of hand physiotherapists. We anticipate a return to work in the not too distant future for Mr Davies.”