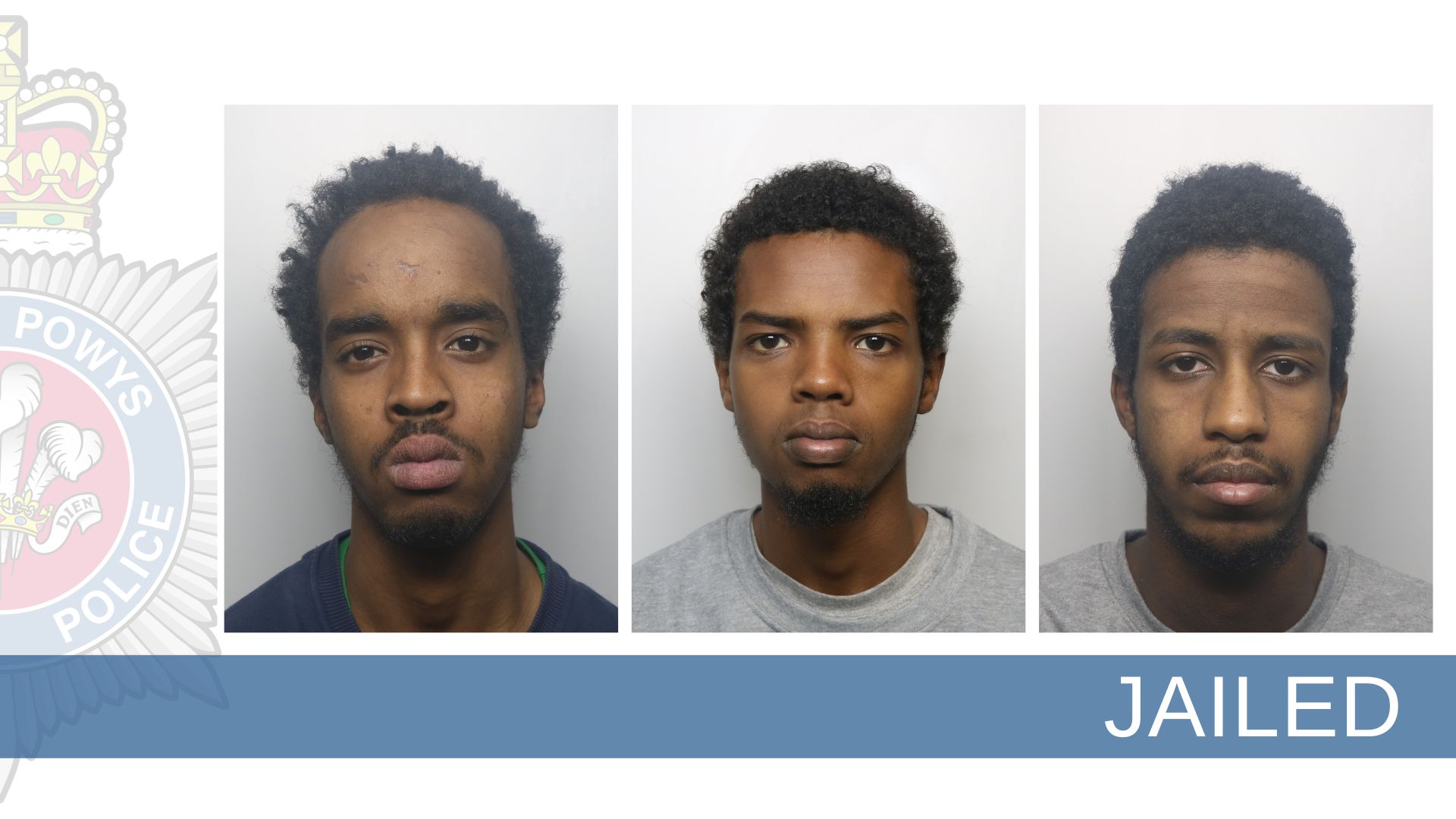 THREE men have been jailed for their part in an organised crime gang supplying class A drugs to Aberystwyth from Manchester.

When arrested, police discovered the men had sent mass messages to known drug users in the area offering cocaine, heroin and cannabis following trips to Manchester to collect supplies.

The group was so persistent in their activity that they made a drugs run and were back in Ceredigion less than 24 hours after being detained on suspicion of dealing illegal substances.

Following an extensive investigation by Dyfed-Powys Police, Mustafa Saiid, Faisel Ahmed and Shuaib Issak have been jailed for a total of 10 years and 10 months.

Detective Sergeant Steve Jones said: “Digital investigation was key during this operation, as on arrest the men were found to have a number of mobile phones and SIM cards with different phone numbers which were being used to make deals.

“We found Saiid was sending mass messages to large groups of people stating that he had drugs for sale. Up to 100 messages were being sent in one go, with eight different phones and four SIM cards used over six months.

“We believe this group was supplying large quantities of class A drugs into Aberystwyth, and the fact they were willing to come back to the area within a day of being detained and searched by officers shows how brazen their actions were.

“These jail sentences will not only put an end to this supply chain, disrupting the use of drugs in the area, but to the exploitation of young and vulnerable people to deal illegal substances.”

Said, aged 22, and 23-year-old Issak were first stopped by police in July 2020 after a phone call from a member of the public reporting they had been approached and offered drugs in Aberystwyth.

Officers searched the area and came across a Vauxhall Corsa that smelled strongly of cannabis. Saiid – the registered owner of the car – was the only person in the vehicle, and had £400 and a SIM card hidden in his sock. Issak was found nearby shortly after.

The pair were taken to Aberystwyth police station to be searched, where they denied knowing one another, gave addresses from the Manchester area and had no apparent link to west Wales.

The same night, their car was seen travelling out of the force area to Derbyshire and Manchester, before heading back to Aberystwyth the following day. Police intercepted the car and discovered Saiid and Issak inside.

DS Jones said: “Due to the previous day’s activity and the travel pattern of the car, they were detained so we could search them and the vehicle.

“While in custody, Issak was found to have hidden 42 wraps of crack cocaine in his body with a potential street value of £420.

“He claimed he was on his way to north Wales to meet people he had been at school with, however a number of well-known drug users from Aberystwyth tried to call a mobile phone we had seized from him, strengthening our suspicions that they had returned to carry out more deals.

“All messages had been deleted from this phone before they were detained.”

Digital enquiries revealed that on the morning of the first arrest, 13 text messages were sent from one of the SIM cards saying that the sender was “active all day” and that cocaine was “going fast”. The next day, 19 messages were sent saying “place your orders back in town in 1 hour banging white going fast don’t be late”.

DS Jones said: “As the investigation progressed, we received information that a car registered to Saiid was once again travelling through Ceredigion. We stopped the vehicle, which was being driven by Saiid, with passengers Ahmed, and a 16-year-old, in Machynlleth.

“As we had intelligence to suggest they were still dealing into Aberystwyth, the three were arrested immediately. A number of phones and SIM cards were examined, showing that messages linked to the supply of drugs had been sent over a two month period.”

Saiid, Ahmed and Issak were charged, admitted the offences, and appeared at Swansea Crown Court for sentencing on Friday, November 4.

Faisel Ahmed
Faisel Ahmed, aged 19, was jailed for three years and two months for being concerned in the supply of class A drugs.

Shuaib Issak
Shuaib Issak was jailed for two years and eight months for possession with intent to supply and being concerned in the supply of class A drugs.

No further action was taken against the fourth person arrested.